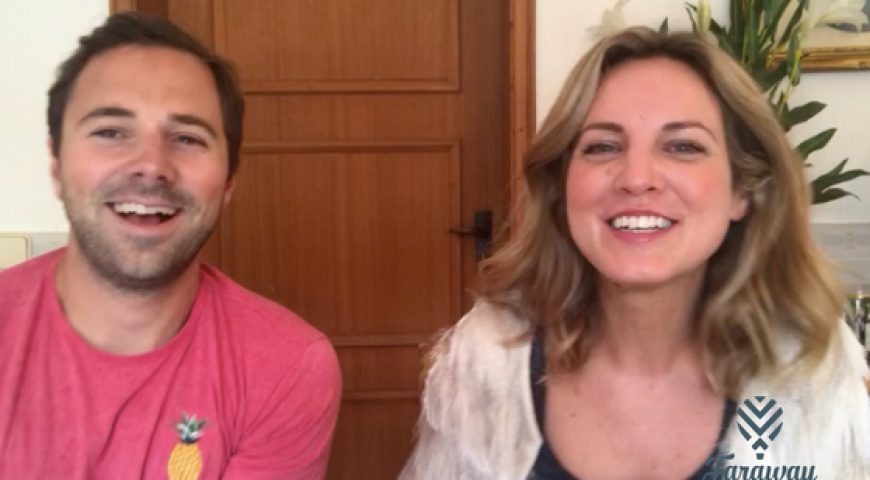 Earlier this year, we decided to move over to Cape Town for three months. It was a mini experiment to see what embracing life in a new city would do for our creativity, our business and our happiness. Here’s what we learned (watch the clip or read on)…

We’ve also been doing some work behind the scenes attempting to put some structure around what we do. Planning trips and planning travel is a messy process, so we’re trying hard to make it a more seamless experience for our travellers.

Plus, we’ve launched our very first group trip to Malawi where we’ll be taking in castaway islands, the Lake of Stars arts and music festival, hiking around the Zomba plateau and a big 5 safari at the end. (More details here).

We’ve based ourselves in Cape Town over the last few months, which has been incredible. We’re still at the stage of our business where we’re working long hours and it can be quite stressful at times. One of the perks we’re keen to make the most of is the flexibility to live and work from anywhere. It’s something we always wanted to do when we were in corporate careers, but never had the opportunity to; it feels good that we’re able to make that happen for ourselves. And Cape Town is a beautiful, fun city.

We’d never been to Cape Town before, but everybody had told us it would be amazing. And it was. We were toying around where to go to escape the winter period from February to May and explored a few of the more traditional “digital nomad” (ha!) options: Bali, Thailand, Nicaragua… But ultimately we decided that we wanted to be based in a city; somewhere we could go to the beach if we wanted to, but it wasn’t taunting us from our window every single day!

We’re currently building out our Africa business, and were keen to get to know some of the places we don’t know already. You might have seen our update from our trip to Malawi and Mozambique last year – we absolutely loved it. A few years ago, Helen spent three months living out in Tanzania, too. There’s a bit of a misconception about Africa being unsafe, extortionately expensive and only worth visiting for a safari or a volunteer project; we’re keen to explore and show that there’s so much more than that.

We wanted to attend some big travel shows out there, too; WTM Africa and We Are Africa. Both were a chance to meet lots of new partners and some we’re already working with, and to learn lots more about southern Africa.

It’s a cool city and a fun place to explore. There’s a laid-back, beach-y culture and more of a work-life balance than we have at home in London. There are lots of local artists, designers, markets, restaurants… And it’s beautiful. Table Mountain is in every direction you look. If you haven’t been before, we can’t recommend it enough.

It’s worth mentioning: if you’re worried about safety there, please don’t be. Like any big city, you must keep your wits about you and look after your belongings. But we had no problems whilst we were over there. Of course, the tourist-y areas are beautiful but we’d strongly recommend seeing some of the other sides of the city too. Like lots of major cities, they have a fairly serious issue with homelessness, and its underlying causes. But, a new president, Ramaphosa, was appointed whilst we were over there and he seems to be bringing hope about the future.

There was also lots of media coverage about the water situation before we headed over. Cape Town and the Western Cape were struggling with the biggest drought for 100 years, and water levels were running down to Day Zero (when the taps were predicted to run dry). We actually had quite a bit of rain when we were there, and Day Zero has been pushed back to next year. But, it does make you a lot more conscious of your water consumption – even if it’s just switching the tap off when you’re brushing your teeth or showering over a bucket so you can re-use the water. It didn’t limit us, but did make us think.

Either way, Cape Town is absolutely ready for visitors so please don’t let it put you off.

Our original plan was to spend six weeks in Cape Town and six weeks travelling about in South Africa.

Of course, we under-estimated the time it takes to settle into a new city and figure out the lay of the land before getting into proper work mode. (As usual!), we also over-estimated what we could achieve in a fairly short period of time. So, we ended up spending almost the whole time in Cape Town. But we squeezed in a couple of long weekend trips along the Garden Route and up the Western Cape.

At the very end, we did a ten-day road trip in Namibia, which was absolutely incredible. It was pretty exhausting (we covered 6000km in 11 days!) but absolutely wow. It’s such a beautiful country and very different to anywhere else we’ve been.

Moving over to Cape Town was an experiment for us; and, it was a successful one. We loved exploring a new city together and it really felt like home even after only three months. We lived in a fun and welcoming community, and saw familiar faces again and again. It was also relatively affordable (especially compared to London), so it felt like we had a normal life again for the first time in a while.

The lifestyle in Cape Town worked really well for us, too. There’s something about being close to a beach that makes people limit the hours they work. It rubbed off on us and is something we’ll try to do more at home. Having a change of scene felt really good from a creativity perspective, too; it makes you think differently and prioritise differently. We absolutely loved it over there and feel excited to go back for a while later in the year.

Take time out for an adventure.

Do you dream about escaping your routine and going on a far-flung trip of your own? Whether it’s 3 weeks or 3 months, we’d love to help. Book in a free exploratory call here to get started.