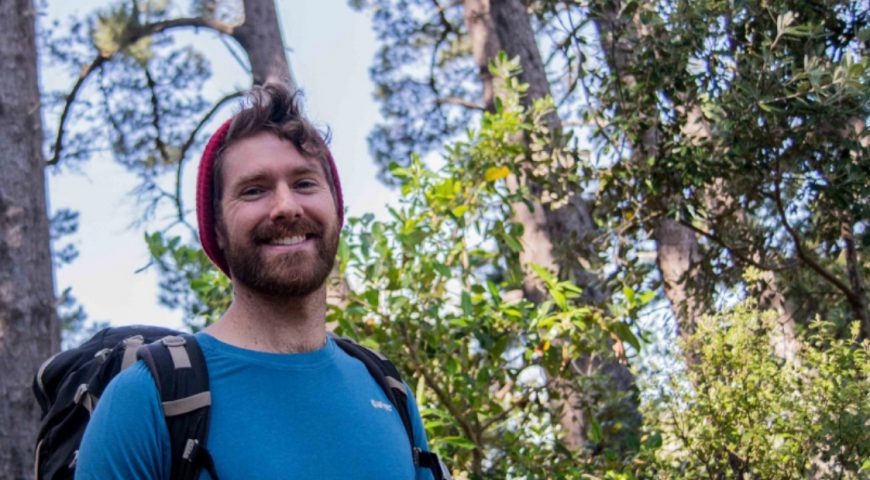 After ten years in London, Rob decided to volunteer and travel in Tanzania, where he’d spent much of his childhood. This experience led him to complete a charity walk along New Zealand’s Te Araroa trail as a brand ambassador for Hi-Tec. Since then, his career has taken a new direction. Here’s his story and his experience of how travel can help you get clear about what comes next.

In late 2012, I made a spontaneous decision to travel.

I’d recently broken up with somebody after a long time. It was that archetypal situation. You have a significant shift in your life and it makes you sit back and re-evaluate what you’re doing.

One day at work, I spotted Raleigh International tweeting about their new projects in Tanzania and that was ultimately the catapult that made me go. I’d spent a significant chunk of my childhood there through my parents’ work, so it just fit.

I applied to join their expedition the following spring and the next thing I knew it was happening. I fundraised the money that Raleigh asks of its volunteers, quit my job and let my flatmate know I was moving out.

I’d wanted to travel on my own for a while, but never quite got around to it.

In her early twenties, my mum did this epic overland journey via the Giant Buddhas in Afghanistan before they were destroyed. I’ve always felt inspired to have an adventure like that of my own.

But I made the decision after uni that I wanted to live with friends in London. So, I moved straight down and took a job in the voluntary sector. After a decade, it was starting to feel like time to move on. There’s so much of the world that I hadn’t – and still haven’t – seen.

Once I’d decided to go, I knew this was my opportunity to travel more.

So, before I left the UK, I arranged four months of volunteering in my old school in Tanzania, Christmas with my dad’s family in South Africa and a flight from there to New Zealand, a country I knew I wanted to explore.

New Zealand didn’t cross my mind until just before I arrived.

I had a quick Google when I was in South Africa, came across the Te Araroa trail and again I made a snap decision. Straight away, I just knew it was what I wanted to do.

To have the best chance of completing the trail, you have to start it in spring. I arrived into Wellington in mid-summer not knowing what I’d do for the next nine months or where I’d stay. Luckily, I found a room and got myself a job in a restaurant.  It wasn’t exactly what I’d had in mind but it ended up being a blessing. It turns out being on your feet for seven to eight hours a day is the perfect prep for the trail!

I also wanted to use the trek to raise money for two young people’s charities that I care about, Raleigh in Tanzania and a friend’s charity in Kenya. So I spent a lot of my spare time doing my own PR and reaching out to potential sponsors. Luckily, persistence paid off and Hi-Tec invited me to be one of their brand ambassadors.

I kicked off the trail on 29th October 2014. It took us five months, one week and one day.

I’d initially planned to do the trail alone, but a friend-of-a-friend came out to join me. He was also at a mini crossroads in his life and fancied the challenge. We were both beginners and of course we made tons of mistakes, not least carrying far too much in our rucksacks.

New Zealand has an awesome network of trails and mountain huts (called “tramping huts”). You buy a season pass and you can stay in as many huts as you like along the way. Some were really cool, with old-school iron wood burners that are so needed after a day of hiking in the cold up in the mountains.

By the end, we absolutely stank. About four months in, we arrived in Wanaka in the South Island and the only place with availability was a shared dorm room with a group of 19-year-old Swedish girls. It was quite embarrassing really, but they were very good about it…

I was away for just under 2 years, and had some incredible experiences in that time.

Since being a kid and living in Tanzania, I’d always wanted to climb Kili. So, after Raleigh, I did it. Getting to the top was really quite emotional. I’ve never seen the Milky Way anywhere near as clearly as at that summit.

Volunteering in my old school was also very special. I hadn’t been there for 17 years. Going back into the same classrooms and even using some of the same textbooks tapped into a real pocket of my memory. I even managed to visit my old house.

Another really special time was when my dad flew out and joined me for a week of trekking together.

But along with the highs came some lows too.

You’re walking in this incredible scenery, but with humungous bags on your backs. After a couple of months, I could only sleep on one side because my hip was so sore.

My lowest point was when I strained my Achilles walking along a hard stretch of road on the edge of the Tongarea crossing with an overloaded bag. At that point, I was head in hands. I was raising money for charity and just thought, “I’ve screwed this whole thing up”.

But, I hitchhiked to a campsite where I could rest my ankle for four days and we then spent three days canoeing down the Whanganui River. (It was phenomenal, by the way.) Fortunately, a week with no weight on my ankle healed it. I then met up with my dad who’d come out to see me, and we re-did that section of trail together.

I flew home with no set plan of what to do next.

I can’t decide if it was a mistake or not. In a way, I was grateful to finish and head back home to rest my body and see my family. But, this walk had been my entire life for the past year and I’d suddenly got to the end point. I couldn’t quite get my head around it.

There’d been plenty of thinking time during the trek and I knew I didn’t want to settle back into London again. There are too many places I want to go, things to do, people to meet and communities to learn more about.

But after two years of travelling, I also didn’t want to continue without a sense of direction.

After a few months of feeling pretty lost, I applied to join a humanitarian organisation in South Sudan and was accepted. It’s funny, really. It took me a while to figure things out, but I’m the fifth member of my family to go there. When I told people, they weren’t surprised at all.

That trip has definitely made me more adventurous.

I’m more open to new experiences (yes, I know it sounds clichéd) and my barriers have come down. These days, I’m ok with winging things a little more. When I travel, I make a few plans and know that everything else will sort itself out.

Living in London, my holidays were often quite similar. I have friends in Bermuda, so I’d either visit them or go back to East Africa. Now, I have a much longer wishlist and every break from work feels like an amazing opportunity to go somewhere new.

Do you dream about escaping your routine and going on a far-flung trip of your own? Whether it’s 3 weeks or 3 months, we’d love to help. Book a free exploratory call here to get started.

As we’re wrapping up warm here in London, our ho

See more... Follow us
This error message is only visible to WordPress admins

Faraway uses cookies to make our site simpler.OkFind out more